This project was completed for the course DHN3300: Introduction to Text Encoding as a directed reading project in Digital Humanities at the University of Ottawa. The focus of this project was to digitizes Armenian poetry translated into English using TEI and XSL. The 13 poems and poem fragments featured in the project were written by a young Armenian poet named Heranush Arshakyan (1887-1905), who died at the age of 18 after losing a battle with tuberculosis. 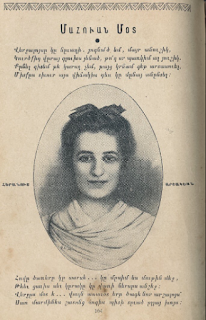 I first found Arshakyan’s poems on Wikipedia after a long search on the Internet. My family is Armenian, so I felt particularly drawn to analyzing and digitizing poems written by an Armenian, specifically a female artist from the late 19th century to early 20th century. Finding an artist from this era was important to me since a lot of the work of Armenian artists was lost after the 1914 Armenian genocide. Finding poems written by Armenian women was hard enough, but became even more difficult since at the time that I started this project most of the International Armenian libraries were closed due to Covid-19. I decided to continue my search online, and after a long search I came across Heranush Ashkayans Wikipedia page. After reading through her biography, I noticed a reference on the page containing a PDF document. When I opened the document, I noticed that it was entirely in Armenian.

After reading the translated document, I too was intrigued with Arshakyans life and thought it would be interesting to analyze her poems to see trends in how she was feeling while she was writing her poems. Once the text was translated, it was digitized and analyzed using TEI and XSLT. Continue browsing this blog to learn more about Arshakyan, her poetry and how to use TEI and XSLT to digitize literature!

For more information on this project you can contact dhnarts@uottawa.ca